We have visited the site on a couple of occations. Unfortunately they are closed on the weekend so we just have to look across the fields to see a few of the dishes. Where this is located is close to one of my favorite fishing stops so It's not that far out of my day to drop by and take a few pics. I've been a Seti supporter and participant for several years and rank in the upper 10% of project members. 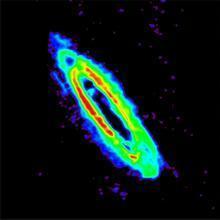 Photo courtesy of Seth Shostak of the SETI Institute

WHAT A VIEW: The first image taken by the 42-antenna Allen Telescope Array depicts the atomic hydrogen in the Andromeda Galaxy, the nearest large spiral galaxy to the Milky Way. 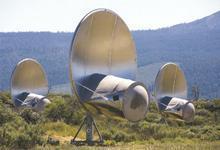 SEEKING E.T.: These three radio astronomy dishes are among 42 that have been linked together at a Hat Creek observatory to seek signs of intelligent life in the cosmos.

HAT CREEK -- Is there anybody out there?

Alien hunters are hoping to answer that age-old question.

The first 42 of a planned 350 radio dish telescope system designed to look -- and listen -- for signs of extraterrestrial life in the universe are up and running in eastern Shasta County.

The completion of the $50 million first phase of the Allen Telescope Array at the nonprofit SETI (Search for Extraterrestrial Intelligence) Institute's Hat Creek Radio Observatory is being celebrated here today by those who are finally seeing their dream materialize.

Among the celebrants at today's private dedication is Microsoft co-founder and philanthropist Paul. G. Allen, whose family foundation has donated $25 million to the radio telescope project that bears his name.

The project, which began in 2001, is a joint effort of the SETI Institute and the University of California at Berkeley's Radio Astronomy Laboratory. The entire 350-radio dish project could be completed in about three years.

"This is a great day for the science of radio astronomy and the study of the cosmos," said Leo Blitz, UC Berkeley professor and director of the Radio Astronomy Laboratory.

It's his belief that the secrets of the universe are a little closer to being unveiled as a result of the telescope array, which also will provide scientists with a better understanding of exploding stars, black holes and other mysteries of deep space.

Project officials explained that every object in space emits radio waves that can be collected and studied.

From observation of these signals, radio astronomers can create a picture of astronomical bodies and events at great distances, revealing details not discernable by telescopes operating at other wavelengths, the officials said.

They expect that during the next 24 years, the dishes in the array, each 20 feet in diameter, will be able to collect about 1,000 times more data that has been accumulated over the past 45 years.

"The technical capabilities exponentially increase our ability to search for intelligent signals, and may lead to the discovery of thinking beings elsewhere in the universe," SETI astronomer Seth Shostak said. "It is the first major telescope in the world built specifically for undertaking a search for extraterrestrial intelligence."

Reporter Jim Schultz can be reached at 225-8223 or at jschultz@redding.com.